This was the electable module I chose as part of the Humanities strand. I had no idea what it might involve, however, I picked it because the identity aspect appealed to me. At the first seminar the group were given a couple of poems to read, one was There was a Boy (William Wordsworth). This took me by surprise, I just wasn’t expecting poetry, something I had no experience off, apart from John Cooper Clarke in the 70’s & 80’s. I wasn’t entirely sure if this was going to be relevant to me, or my identity, but time would tell. Over the next few weeks we read various works, including some fascinating psychoanalysis case studies and things began to fall into place and become relevant. Towards the end of the seminar period we read a poem called Travelling South, Scotland, August 2012 by John Burnside. This poem struck a cord with me and along with the aforementioned Wordsworth poem, inspired my creative output for the module.

The creative output for the module is overtly political, and as well as being inspired by the poems mentioned above it is also based on my opinions regarding Scottish independence and the break up of the UK, a very important strand of my identity. For me the issue is complicated. I see the political union as an utterly undemocratic disaster and believe that significant change is required in the way the UK is Governed. I also believe that all those invested in earning money from the political union will resist the required amount of change required, and so I support the break up of the UK in order to force it upon them.

Reading the Burnside poem brought back memories of urban decay, unemployment and the loss of industry in Scotland during the Thatcher years. This was a time when I was in the Royal Navy and I remember seeing the effects of Thatcher when I came home on leave, this also continued after I moved to Helensburgh to work on Polaris at Faslane. I wasn’t political at that time but gradually become so after moving back to Scotland. The Wordsworth poem made me think of leaving Scotland and going south for work and what I had left behind.

I decided to work with a couple of iconic images, the first being the thistle and the second is the union flag. Clearly the thistle is an easily recognisable Scottish emblem in the same way that the union flag is for the UK. I also decided early in the module that I was going to work in bronze, a new material and process for me, this piece is only my second bronze. I’m not going to go into the details of making it, if you’re really interested and suffering from insomnia get in touch and I’ll happily discuss it. An image of the piece is posted below along with a poem wot I wrote to accompany it. While I think it’s easy to see the message the bronze conveys I wanted to relate that to my ‘self’ to highlight why I created the bronze. It’s a first attempt at a poem, I like it, however, I don’t know how good or bad it is because I’m not really qualified to say and I actually feel like a bit of a pretentious dick for even attempting it, happy to get feedback on it though but keep it civil… 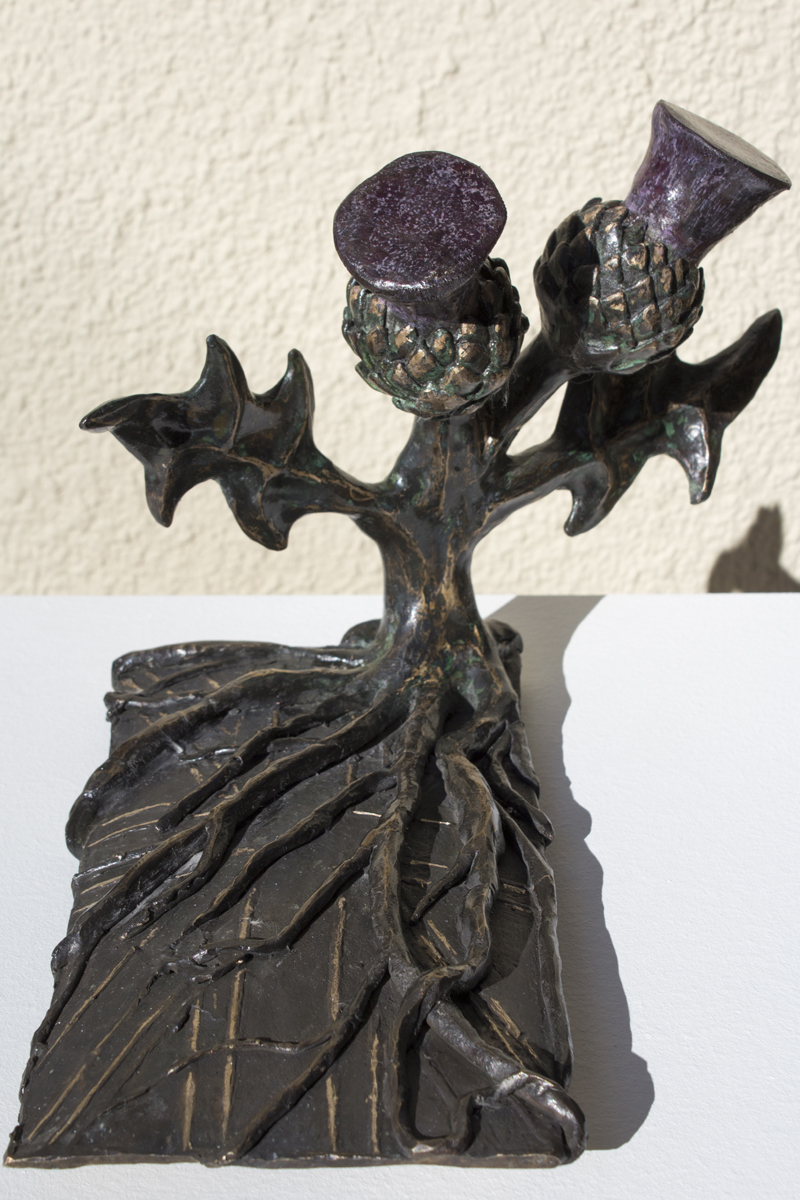 And the accompanying poem…

We need change because
When we vote one way
It matters not, means nothing
If the Rose votes another

Edinburgh gets to play at governing
But the real power is left down there, London
The remote disconnected place where
We are ruled over and over-ruled

The Thistle needs to take back control
Develop, nurture and bloom
Create our own future, our own place
Free to express our collective ‘self’