Firstly, after my UG graduation, I was accepted onto the 2011/12 Master of Design course, this actually turned out to be the last MDes as it became master of Design for Services the following year. However, I left the course in March 2012 to take up employment on the Imprints research project which you can read about HERE

On the MDes I intended to continue research centred in healthcare, in particular looking at Anaphylaxis in young people. This is a very interesting subject and I was particularly interested in why some young people appear to not carry their medication, epipens, for instance. In addition to that I wanted to explore why some young people experiment with trigger foods. I also wanted to help parents of young children with severe allergy disease curate a record of their child’s illness and its effects on them & any siblings as they grew up. This record would have been gifted to the child when they took control of the illness from their parents in the same way as a family heirloom may be passed from parent to child. However, it was not to be and I left to work on Imprints. All was not lost though as I was going to work in identity management, a topic not unrelated to my educational research.

In 2017 I enrolled on the MFA&H, in the run up to that I had been self employed casting jewellery for independent jewellers & doing CAD work for jewellers as well. That had always been a long term term goal from my UG 3rd year. I realised I had to find a niche in the industry and began with CAD, however, I had an opportunity to begin casting and took it. After working at it for 18 months I took the decision to stop because there weren’t enough hours in the day! I either had to expand and take someone on to help or stop. I didn’t want to be responsible for employees so stopped and luckily managed to get back in to University.

I hadn’t made a firm plan about where I going with research etc, however, my starting point was the subject of slavery in Scotland. In 2016 I was commissioned to make a prop for a short film about two runaway slaves. The film was set in Scotland in the year 1745.

Scottish history is a subject I like, I’ve done a fair bit of reading on the subject over the years and while I was aware that Scotland has a dark past connected to the slave trade I can’t remember reading much about it at all.

The contact with the film makers and creating the prop had ignited an interest in this part of our past and so, as I said, it was MFA starting point. I wasn’t sure where it would lead but I decided to just run with it and let it develop over time. Clearly though, i recognised that while the past has generated the interest, slavery still exists today albeit the terminology is different, with it now called ‘people’ or ‘human’ trafficking. This also leads on to issues of fair trade, the ethical production of goods, sweatshops, and closer to home (as a jeweller) the ethical production and supply of metals and gems so there was scope to expand, or not, as my ideas developed

I’m not going to go into any great detail about the film, I’ll let the following trail speak for it instead.

From the film Vimeo page

“When two young black slaves escape into the wilds of 18th century Scotland, they must use all of their courage and strength to survive, unite, and stay free. On their journey they rediscover their spiritual and cultural connection to one another in pursuit of freedom through a foreign land set against an epic and elemental backdrop at a turbulent time in Scotland’s history.”

I was commissioned to make the collar worn by Moyo in the film. It was based on two historical examples, one from Wales and one from Glasgow. My collar is shown below, worn by Moyo at a test fitting. David Andrews is the name of the character played by Clive Russell. Seeing the collar on Moyo was very strange. 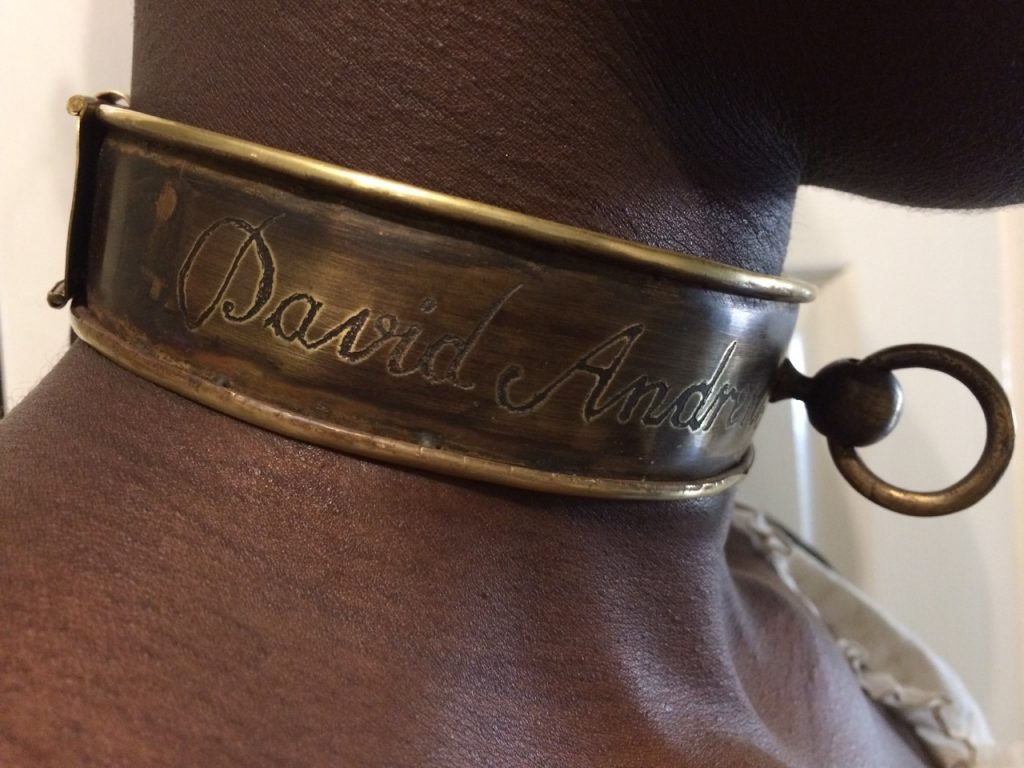 While I was really happy with the quality of the work, it’s meaning overshadowed that. The Glasgow collar I linked to above is made from silver and it’s sole purpose is to show the wealth of the owner, one of the main reasons for the wearing of jewellery, however, in the case of a slave collar the wearer is also a possession to be shown off as a status symbol.

Having that in mind, as I began the MFA, I hoped to be able to raise awareness about Scotland’s past connections to the slave trade.

The following work was completed for a Humanities electable module. I had no idea what it might involve, however, I picked it because the identity aspect appealed to me. At the first seminar the group were given a couple of poems to read, one was There was a Boy (William Wordsworth). This took me by surprise, I just wasn’t expecting poetry, something I had no experience off, apart from John Cooper Clarke in the 70’s & 80’s. I wasn’t entirely sure if this was going to be relevant to me, or my identity, but time would tell. Over the next few weeks we read various works, including some fascinating psychoanalysis case studies and things began to fall into place and become relevant. Towards the end of the seminar period we read a poem called Travelling South, Scotland, August 2012 by John Burnside. This poem struck a cord with me and along with the aforementioned Wordsworth poem, inspired my creative output for the module.

The work is overtly political, and as well as being inspired by the poems mentioned above, it is also based on my opinions regarding Scottish independence and the break up of the UK, a very important strand of my identity. For me the issue is complicated. I see the political union as an utterly undemocratic disaster and believe that significant change is required in the way the UK is Governed. I also believe that all those invested in earning money from the political union will resist the required amount of change required, and so I support the break up of the UK in order to force it upon them.

Reading the Burnside poem brought back memories of urban decay, unemployment and the loss of industry in Scotland during the Thatcher years. This was a time when I was in the Royal Navy and I remember seeing the effects of Thatcher when I came home on leave, this also continued after I moved to Helensburgh to work on Polaris at Faslane. I wasn’t political at that time but gradually become so after moving back to Scotland. partly fuelled by a senior rate colleague on HMS Renown & listening to, and seeing the effects of Thatcherism, on civilian friends, The Wordsworth poem made me think of leaving Scotland and going south for work and what I had left behind.

I decided to work with a couple of iconic images, the first being the thistle and the second is the union flag. Clearly the thistle is an easily recognisable Scottish emblem in the same way that the union flag is for the UK. I also decided early in the module that I was going to work in bronze, a new material and process for me, this piece is only my second bronze. I’m not going to go into the details of making it, if you’re really interested and suffering from insomnia get in touch and I’ll happily discuss it. An image of the piece is posted below along with a poem ‘wot I wrote’ to accompany it. While I think it’s easy to see the message the bronze conveys I wanted to relate that to my ‘self’ to highlight why I created the bronze. It’s a first real attempt at a poem although I used to write a bit when I was in the Navy but they were never made public. I like it, however, I don’t know how good or bad it is because I’m not really qualified to say and I actually feel like a bit of a pretentious dick for even attempting it, happy to get feedback on it though but keep it civil please! 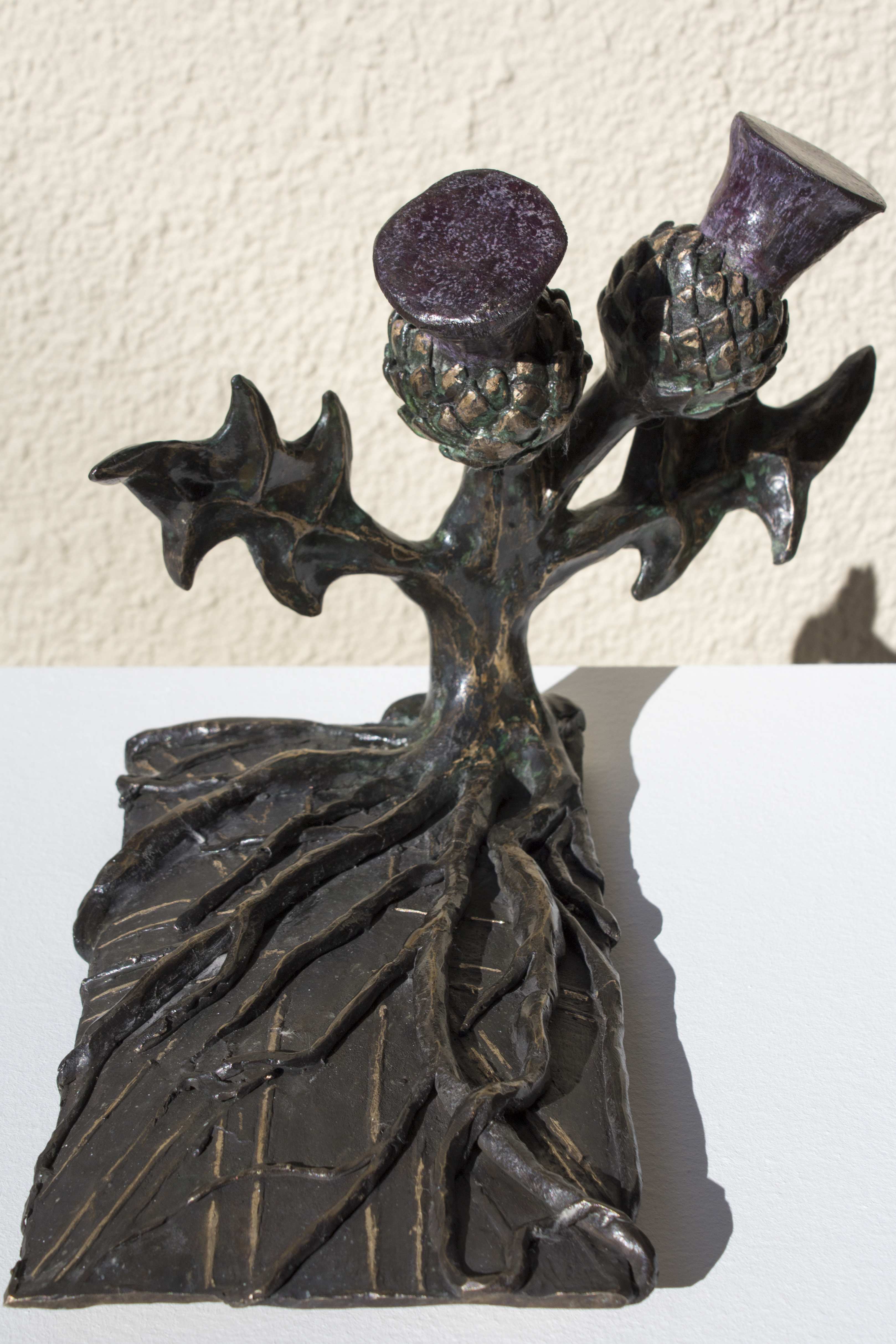 We need change because
When we vote one way
It matters not, means nothing
If the Rose votes another

Edinburgh gets to play at governing
But the real power is left down there, London
The remote disconnected place where
We are ruled over and over-ruled

The Thistle needs to take back control
Develop, nurture and bloom
Create our own future, our own place
Free to express our collective ‘self’

And once more a PG course ended early. After semester 2 I had a bout of ill health & deferred the third & final semester. To cut a long story short, while on the break, I became a full time employee again and decided not to return to study, however, this time my interests aren’t going to stop there. I fully intend to explore & realise the ideas I had for the final semester and these will be recorded and discussed on a different section of the site.