The video below is from the FB page of BBC Scotland News. The subject matter, Glasgow & its connections to the slave trade, has also been the subject of an article in the Scotsman. I’m seriously disappointed with a lot of the comments on both articles. It would appear that, even with obvious trolls ignored, a large percentage of those commenting just don’t seem to get what this is all about.

Many of them claim that there’s no point to bringing all this up as it’s all in the past. Yes, it is in the past however, racism today is directly relate to that. The racism of today is a continuation of the racism of yesterday. We are not born racists, we learn it. We can also unlearn it, or at least learn not to be racist and then teach future generations to be the same.

Many of the posters claim that Glasgow’s connections to the slave trade are the fault of only a few rich elite plantation owners, or the merchants who were importing/exporting commodities like tobacco & sugar were solely to blame and that it was nothing to do with ordinary people. However, while the owners and merchants were undoubtedly the main winners, the ordinary working class also benefited from the slave trade by working in it. Consider who was building & crewing ships or building the factories and houses of the merchants etc. It wasn’t the plantation owners or the merchants, they paid other people, ordinary people, to do that for them. Clearly the whole of the Scottish economy at the time prospered due to the slave trade, some would even argue that the money brought into the UK kick-started the industrial revolution. People need to also remember that this isn’t a class issue nor is it a Scottish independence issue, it’s a race issue.

I see no problem having a museum dedicated to Scottish Black history in Glasgow, or anywhere else in the country for that matter. I think understanding the Black history of Scotland is crucial if we are to move beyond the effects of those sections of our past we’d rather forget.

The posts below will open in an light-box, just click on them and you can scroll through. These are representative of many of the comments made, however, there are also a lot of responses that argue against the ignorant and the racist. I have a lot more of these comments, they fill a 36 page PDF, and may become a section of any future exhibition I have. 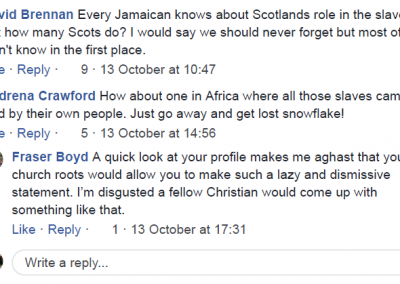 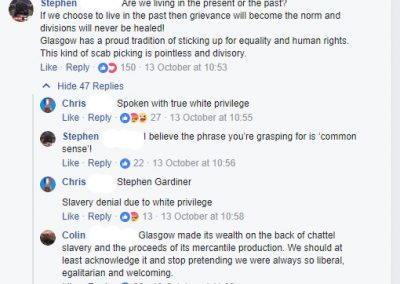 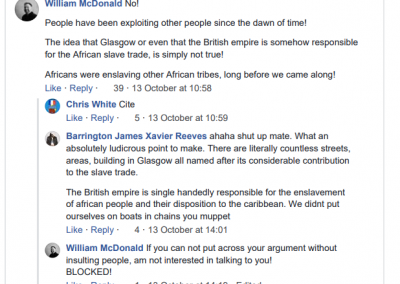